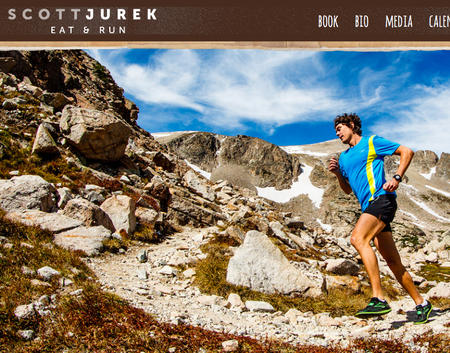 Scott came to us to rebuild his site and burnish his brand in time for the release of his new book, Eat and Run . His affability, patience and attention to detail guided us in implementing crucial design details and making a site on which we were proud to have had 4,969 hits on the first day after launch.

Scott's passion for aesthetics and functionality gave us the challenges we needed to build a truly gorgeous site. In terms of design, we explored a subtle logo mark and type treatment. We chose Open Sans and Open Sans Condensed as the sites typeface which proved to be very versatile. And we had fun exploring worn textured papers backgrounds and brown color tones to express the site's travel journal feel.

The design was translated into code with many layers and textures in the mockups, making semantic code and responsive design quite difficult and satisfying to accomplish. We're glad we've made responsive design just part of what we do here at dojo4, even when clients don't ask for it up front. About 25-30% of Scott's initial visitors have been using tablets or mobile devices. By not having to go back and retrofit, we saved substantial time and budget.

We've also been tremendously pleased with the Middleman App, a static site generator based on Sinatra (http://middlemanapp.com/). It allows us to "templatize" websites (using ERB & SASS) and leverage data structures with loops to handle repetitive tasks just as WordPress, Drupal, etc. do. Middleman's advantage, however, lies in its ability to spit out a static site, making the end product faster and unhackable (sorry bad guys).

Since we wanted Scott to be able to update content regularly, Justin wrote a sweet jQuery plugin that "injects" Tumblr posts in several places across the site (https://github.com/Hoosteeno/inject_tumblr). So, despite having a static website, Scott still has fresh, timely content.

We're glad to have had the opportunity to collaborate with Scott and support the release of his new book. Scott's now on tour to promote his book with lots of running events around the country - if you get the chance, it's well with dropping by and meeting Scott when he's in your town...